Have you ever lost a loved one suddenly and not been prepared for your estate? Have you ever had a elderly loved one die and realize that their will wasn’t up-to-date? These are many things we don’t think about on our day-to-day routines. This is where we come in. We want to ensure we’re educating you and helping you stay prepared for when your or your loved ones time comes. Talking about making plans for when you or your loved ones lives end on earth and ensuring you and your loved ones aren’t left with a headache when you leave trying to sort out how you wanted your estate to be handled can help leviate any issues once you’re gone.

By staying up to date with Attorney’s who specialize in Real Estate Law, Trusts, Elder Law, etc… we can bring you the most up-to-date information. 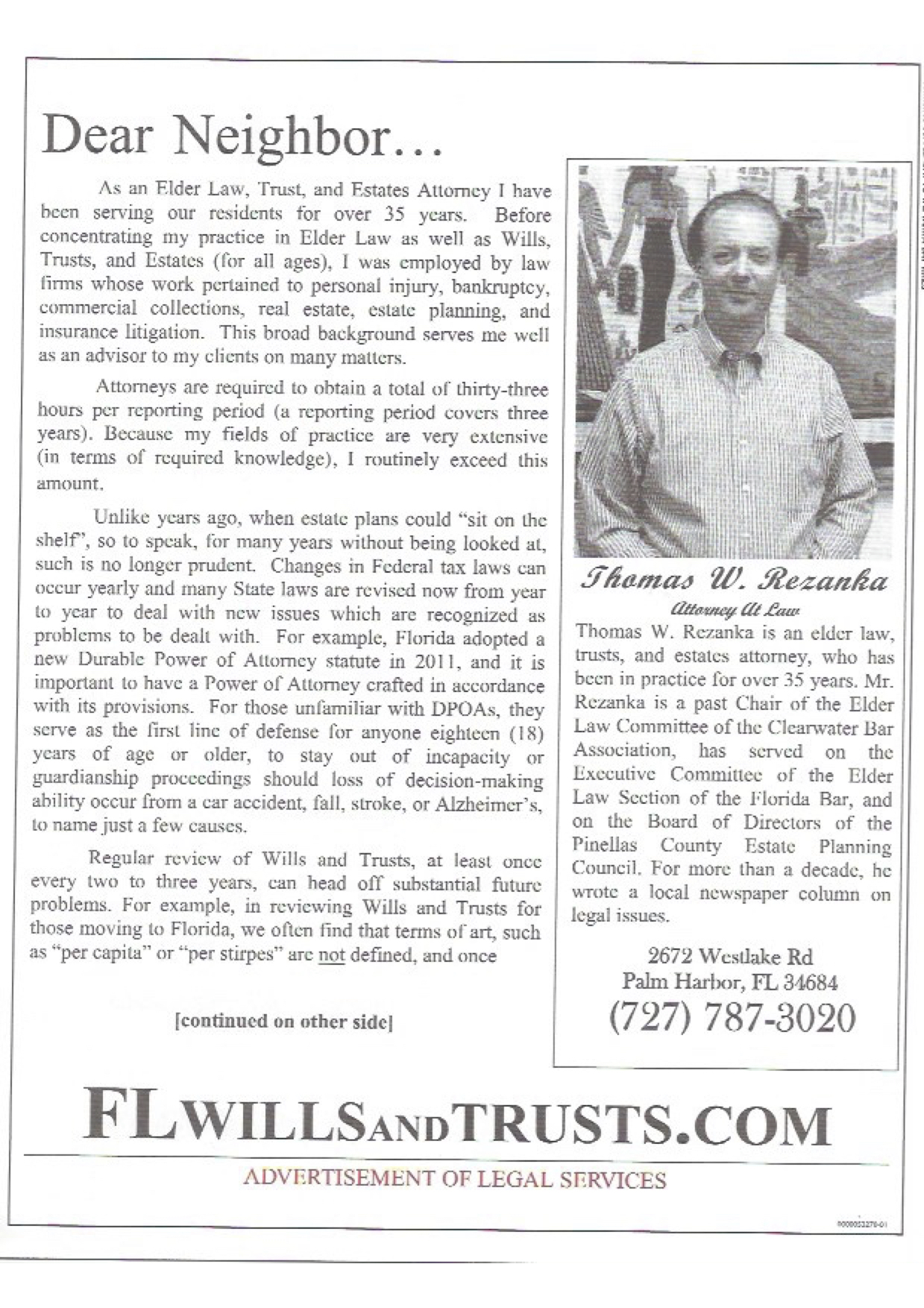 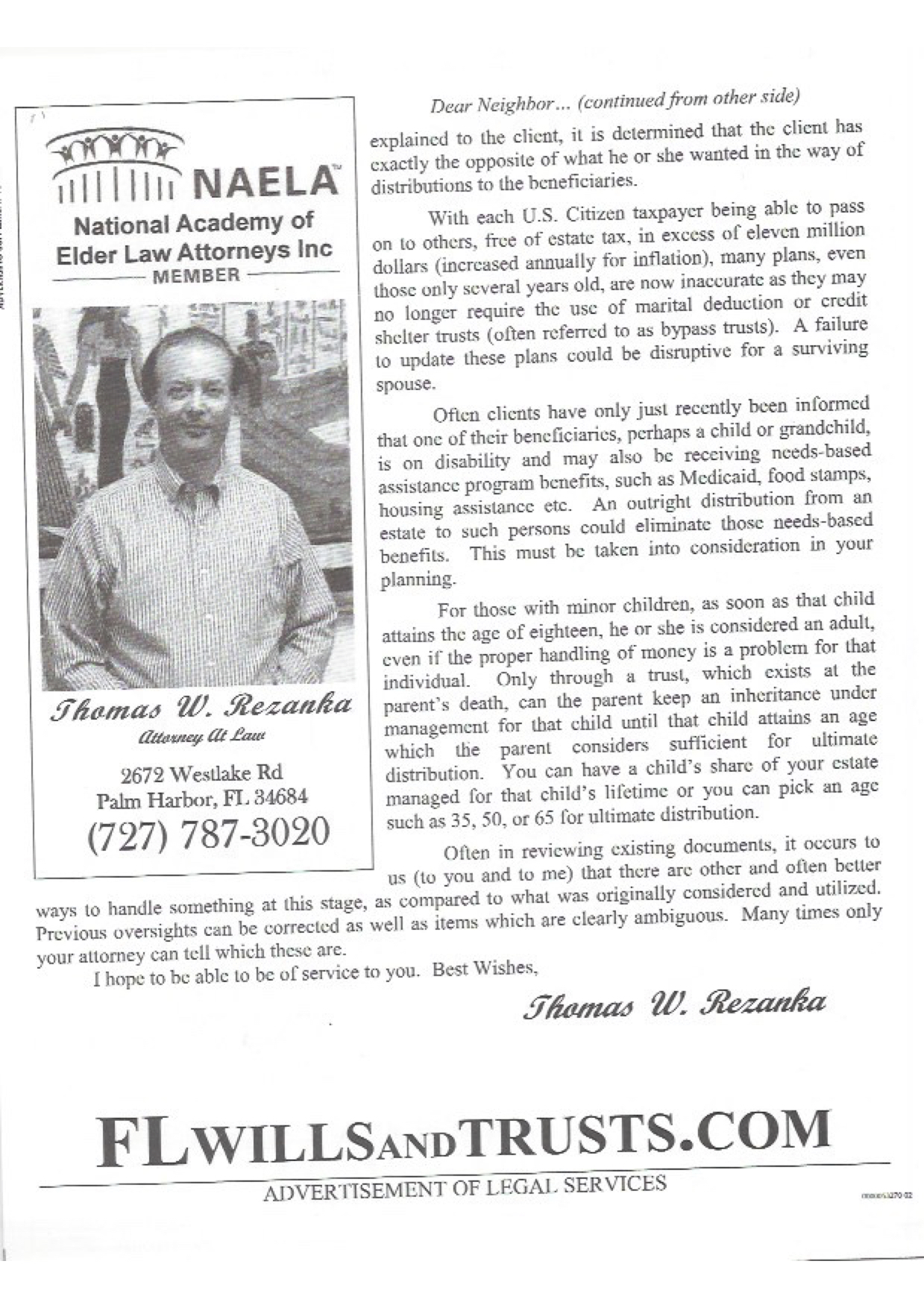 As an Elder Law, Trust, and Estates Attorney I have been serving our residents for over 35 years. Before concentrating my practice in Elder Law as well as Wills, Trusts, Estates (for all ages), I was employed by law firms whose work pertained to personal injury, bankruptcy, commercia collections, real estate, estate planning, and insurance litigation. This broad background serves me well as an advisor to my clients on many matters.

Attorneys are required to obtain a total of thirty-three hours per reporting period (a reporting period covers three years). Because my fields of practice are very extensive (in terms of required knowledge), I routinely exceed this amount.

Unlike years ago, when estate plans could “sit on the shelf”, so to speak, for many years without being looked at, such is no longer prudent. Changes in Federal tax laws can occur yearly and many State laws re revised now from year to year to deal with new issues which are recognized as problems to be dealt with. For example, Florida adopted a new Durable Power of Attorney crafted in accordance with its provisions. For those unfamiliar with DPOAs, they serve as the first line of defense for anyone eighteen (18) years of age or older, to stay out of incapacity or guardianship proceedings should loss of decision-making ability occur from a car accident, fall, stroke, or Alzheimer’s, to name just a few causes.

Regular review of Wills and Trusts, at least once every two to three years, can head off substantial future problems. For example, in reviewing Wills and Trusts for those moving to Florida, we often find that terms of art, such as “per capita” or “per stirpes” are not defined, and once explained to the client, it is determined that the client has exactly the opposite of what he or she wanted in the way of distributions to the beneficiaries.

With each U.S. Citizen taxpayer being able to pass on to others, free of estate tax, in excess of eleven million dollars (increased annually for inflation), many plans, even those only several years old, are now inaccurate as they may no longer require the use of marital deduction or credit shelter trusts (often referred to as bypass trusts). A failure to update these plans could be disruptive for a surviving spouse.

Often clients have only just recently been informed that one of their beneficiaries, perhaps a child or grandchild, is on disability and may also be receiving needs-based assistance program benefits, such as Medicaid, food stamps, housing assistance etc. An outright distribution from an estate to such persons could eliminate those needs-based benefits. This must be taken into consideration in your planning.

For those with minor children, as soon as that child attains the age of eighteen, he or she is considered an adult, even if the proper handling of money is a problem for that individual. Only through a trust, which exists at the parent’s death, can the parent keep an inheritance under mangagement for that child until that child attains an age which the parent considers sufficient for ultimate distribution. You can have a child’s share of your estate managed for that child’s lifetime or you can pick an age such as 35, 50, or 65 for ultimate distribution.

Often in reviewing existing documents, it occurs to us (to you and to me) that there are other and often better ways to handle something at this stage, as compared to what was originally considered and utilized. Previous oversights can be corrected as well as items which are clearly ambiguous. Many times only your attorney can tell which these are.

I hope to be able to be of service to you.

Thomas W. Rezanka is an elder law, trusts, and estate attorney, who has been in practice for over 35 years. Mr. Rezanka is a past Chair of the Elder Law Committee of the Clearwater Bar Association, has served on the Executive Committee of the Elder Law Section of the Florida Bar, and on the Board of Directors of the Pinellas County Estate Planning Council. For more than a decade, he wrote a local newspaper column on legal issues.

We are here for all of your real estate needs anywhere in the U.S. and 41 other regions.